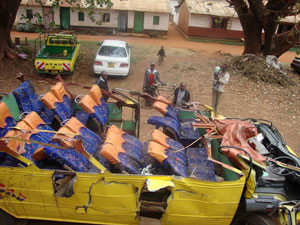 Residents of Kawethei village in Kangundo, Machakos County were still paralysed by the hard blow they received on Saturday night, after 23 members of the village, including six from one family, were killed in a road accident.
By Monday, the atmosphere in the sun-baked village was still charged with gloom, shock and mourning as families and neighbours came to terms with the incident that also left many residents fighting for their lives in hospital


Homes of several families were scenes of mourning as neigbours and leaders converged to console and help them to handle the tragedy.
"We have never seen a thing like this before. We have just lost so many people at once that we don’t know what to do. We are still in shock. But we pray for strength from God,” said Nicodemus Wambua, a resident.
Huge crowds of villagers assembled in the local Catholic Church to mourn and pray for the deceased and injured in a highly emotional service that left several people breaking down into tears.
The normally bustling Kawethei shopping centre appeared a pale shadow of itself as most shops were closed.
“Normally, this place would be full of people selling and buying. But today everyone is mourning and very few people feel like working. We all have to be with the families that have suffered the big loss. The shock was just too big,” said Alex Ndaa, a vegetable seller.
Some of the closed shops included those of victims who perished during the accident including Grace Kavindu, a vegetable seller who left behind eight children.
Her son Musyoka Maingi, who ran a popular hotel in the shopping centre, was nursing serious injuries in Kangundo hospital.
“We don’t know what to say. We only leave everything to God. We are praying for strength and comfort during this difficult time,” said Nduku Musyoka, the daughter of the deceased woman as she welcomed mourners to her home.
Family to Makueni
Twenty-four-year-old Philomena Mukali, who lost her mother Margaret Kikuto Sila was huddling together with her sister Stellamari Sila in a quiet mourning.

Her mother, who had five other children was a retired worker of Postal Corporation and had retreated to her home to farm.
“I feel totally empty. My mother was the love of my life and now that I have lost her, I don’t know how my life would be,” she said.
But the focus of attention was Patrick Nzioki whose family lost six members including a six-month-old baby, the grandson of Richard Muneene who had led the family to Makueni.
“Now all I am praying is for the four injured members of my family to recover while I think of burial arrangements. My mind is totally confused with shock and grief,” he said.
Kangundo MP Johnstone Muthana led the village in mourning as he pledged that he will work with local and national leaders to ensure that the deceased are given a proper burial
He hinted that the deceased may be buried on the same day in a mass burial on a date to be fixed by a committee.
“For those who have lost their loved ones, we want you to know that you are not alone. We are with you all the way. We cannot afford not be with you at this difficult time,” he said.
Strength and patience
A priest at Kangundo Catholic Church consoled family members and residents who gathered to mourn the deceased.

“This is such a big tragedy for our village, but let us pray to God to give us strength and patience to live through it. God must have a reason for doing this and we fully accept God’s decision,” he said.

Kangundo District Commissioner Charity Chepkonga directed the Provincial Administration officers to be on stand by round the clock to help the families with burial and transport arrangements
Peter Musyoki, who was in the second car that was transporting villagers back home that fateful night said the lead car was more than 20 kilometres ahead of them, suggesting it must have been speeding.
Muthama advised Kenyans to exercise care when boarding public vehicles, urging them to avoid overcrowded ones.