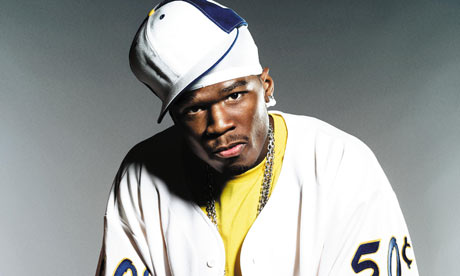 Cheer up Fiddy … 50 Cent forced to change film title
50 Cent has been undone by one of Africa's greatest novelists, Chinua Achebe. The rapper's latest movie has been renamed ahead of its release, due to a conflict with Achebe's most famous work.

Things Fall Apart, published by Achebe in 1958, is Nigeria's most famous English-language novel. It has sold more than 8m copies worldwide. Unfortunately, 50 Cent was not aware of this. He spent much of 2010 shooting a film of the same name, the story of an American football player diagnosed with cancer. "It's a project that I wrote, produced and financed myself," he explained last year. Directed by Mario Van Peebles, it premiered at the Miami film festival in March and is expected to be released soon.

Unfortunately for Fiddy, his film will not keep its original title. After being contacted by Achebe's legal team, 50 Cent allegedly offered $1m to hold on to the title. Achebe, 80, took this as an insult. "The novel with the said title was initially produced in 1958 (that is 17 years before [50] was born)," replied his lawyers, according to Naijan. "[It is] listed as the most-read book in modern African literature, and won't be sold for even £1bn." The film has now been renamed to All Things Fall Apart.

April 01, 2017
The Unique iMlango Programme iMlango is about improving education. We believe that access to the internet and delivering smart digital education services and content helps to improve the education experience and outcomes for children. The programme aims to deliver improved education outcomes to 150,000 children, in 205 schools, and delivers digital attendance monitoring, broadband internet access via satellite and a host of online learning resources to help teachers and students. We are aiming to bring the potential of digital learning and the digital economy to the communities around the schools too. iMlango is delivered by a number of companies in Kenya and the United Kingdom – working in partnership with the UK’s  Department for International Development (DFID)  - and is supported by the Kenyan Ministry of Education, Science and Technology. For more information go to: - http://www.imlango.com/
Read more
October 14, 2011